Staff at Prism have been celebrating as another member of its team notches up a long-service record with the company.

Among staff, one has recently reached a significant milestone in her employment with the company. Brenda Butcher has now been with Prism and its predecessor for 25 years. She joins Bill Smettem who also celebrated reaching his 25 years service not long ago. 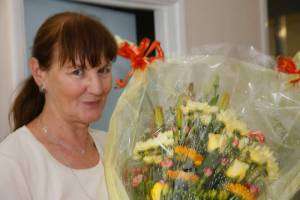 Prism’s Brenda Butcher was presented with flowers, a cake and her long service watch to mark her 25 years service with the company.

Brenda joined Prism as secretary to the managing director. Over the years her role has grown and developed into her current position of company personnel officer and P/A to the directors.

“I started my career as an office junior and gained my secretarial qualifications prior to joining Prism as secretary to the managing director. Little did I think I would still be here 25 years later but I found it such a rewarding place to work and the people so friendly that I stayed with the company,” said Brenda.

“Because I have been here so long, over the years I have been involved in many aspects of the company including sales administration, payroll and human resources.

“Prism is a great company to work for and I have never had time to be bored since I joined. It has been very supportive and encouraging over the years. My days have never become repetitive because my role here is such a diverse one.”

Brenda has seen many changes over her 25 years service, not least in technology. “When I first joined Prism I used an electronic typewriter with a small screen. Over the years I have trained in a number of office systems and software tools to keep pace with the changes in technology. As well as having an overall administration role I am also very much involved in HR, which has been an ambition of mine since I started out as an office junior.”

Prism technical director Richard Walton said: “Brenda is our HR department and she is an extremely valuable asset to the company.”

To mark her 25 years with Prism Brenda received a cake, flowers and her long service watch in a ceremony held in the staff canteen. “All my colleagues were there and I did feel a little embarrassed,” she said.

Presenting Brenda with her long service watch managing director David Aspinall said: “We’re delighted to recognise Brenda’s loyalty to Prism. All her hard work and dedication over the past 25 years is greatly valued.

“Brenda has been a great asset to Prism over the years and fulfils a valuable administrative and HR role. She has seen many changes over the last 25 years and has taken them all in her stride.”

This website uses cookies to improve your experience while you navigate through the website. Out of these, the cookies that are categorized as necessary are stored on your browser as they are essential for the working of basic functionalities of the website. We also use third-party cookies that help us analyze and understand how you use this website. These cookies will be stored in your browser only with your consent. You also have the option to opt-out of these cookies. But opting out of some of these cookies may affect your browsing experience.
Necessary Always Enabled

Any cookies that may not be particularly necessary for the website to function and is used specifically to collect user personal data via analytics, ads, other embedded contents are termed as non-necessary cookies. It is mandatory to procure user consent prior to running these cookies on your website.